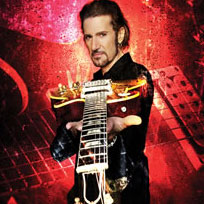 We caught up with Bruce to discuss his new Cd and his history with Kiss. Check out our chat below.

First of all, I want to congratulate you on the new CD. It’s a pretty solid release.

You recently had a big, sold out CD release party at the Cat Club in LA. I heard that it was a pretty amazing event. Tell us a little about it.

Well, LA is a weird town to do anything in to be honest with you. But I live here and I knew that I could get some of the guys that I would consider on the top of my list in my band to come into town, one night, rehearse and do a short set. I’ve known Slim Jim from the Stray Cats for a long time and he’s a part owner of the Cat Club. It’s a cool place, right next to the Whiskey on the strip. So I contacted him, found some cool bands that play on the strip to open and then I started thinking about the set list. I got the commitment from some of my friends to play. Of course Brent Fritz the drummer played in Union with me. Todd Kerns the singer/guitarist, I jammed with a few times. The bass player Adam Curry was recommended by someone from my label. As soon as I knew I had those guys locked in, I got a little more excited. Obviously, the big score was when Nick Simmons agreed to come down to rehearsal. He was curious to see who was in my band and what the vibe was going to be. But as soon as I showed him photos of the guys, he said “I’m in, let’s do it!” We did one rehearsal and then it was the big show.

The place was packed; we had a big guest list of course. But I was really surprised at how many people had paid, especially with everyone in LA being so jaded and plus it was a Monday night. But the place was completely packed. I have never seen the Cat Club like this. And the TV cameras from “Family Jewels” were there. A lot of industry people were there and also Eric Singer, Tommy Thayer, Steve Lukather, Shannon Tweed and her daughter Sophie. Nick came out and did his thing and it went over great. I just put up a story on it on my site www.kulick.net

Do you have any tour plans to promote this CD? And if so, will you take out the band that performed with you at the CD release party?

Yeah, those guys are on the top of my list if anything comes up. The record just came out and I have to figure it all out. I never actually toured the states as a solo artist. I’ve done Australia, South America, Japan, Europe and Mexico. I don’t know, but I’m hoping that I can do something in the states. But as far as the band, we really hit it off well. I told them all, that I’m going to work on putting something together, just give me a little bit of time. I think people will be really happy to see this band perform.

I agree it would be cool to see a set of songs from your entire career.

I did two club gigs in December in Australia; I thought my record would have been released by then. But it was delayed. However, I had a twenty song set, a lot of it was Kiss heavy, but I also included stuff from my first two solo records and only one form BK3 because it wasn’t available yet. But, I have a good set list to draw from. I like to feature my era of Kiss, because Kiss doesn’t really perform too many songs from that era.

On the CD, Gene Simmons sings the song ”Ain’t Gonna Die.” Tell us a bit about that track.

Well, it took about a year to finish that song. When we were writing the music to that, Gene kept singing ”Never going to die.” I thought about what he was singing, and how it flowed off of his tongue, his big tongue. I was also thinking, how does that releate to Gene and how his legacy will never go away. Once I thought about that, I came up with the first line, ”When people say I’m always using my fame.” You know with the press always going after him, he gets the last laugh, because he’s Gene Simmons, so eat your heart out. But, it was a colaborate effort, a three way split between Jeremy, the producer, Gene and myself. It was very natural song for Gene.

Yeah, it sounds like it could be on a Kiss record.

Yeah, it could have fit in on ”Revenge,” absolutely.

Now are you still working with Grand Funk Railroad?

Yeah, that’s been a great gig for me. This is my 10th year with them. Not only are the guys really talented, but we put on a great show. The audience is freaking out when we are half way through the set. I’m kind of surprised that it’s been ten years already, but it feels good and there is no reason to stop. It’s a great gig. I get to be featured a lot and I love the material. It’s a no brainer.

Any plans to record new material with them?

We do some new songs in the set. But the tricky part is that it has to be up to Don and Mel. They own the name, along with Mark Farner. I know that there are a lot of political and probably some emotion reasons why they vacillate on if they want to do it. I know that they think about it sometimes. But they haven’t made the move, but when they are ready to, I’ll be there to give a 1000%.

I would like to ask you some questions about the records that you recorded while a member of KISS. Let’s start with ‘Asylum.’

Well, when I think of ‘Asylum,’ I think of the song “Tears are Falling” being a highlight song. I got to do some cool twin harmony guitar solos in that. I still like doing that song. But a crazy cover. (Laughs)The artwork.

Oh yeah, but at the time, glam was the thing.

Yeah, it was artsy.

Well, that was Ron Nevison. I liked that we had a producer, although I didn’t really care for the sound that much. But, I think that there were a lot of really good songs on it. Paul Stanley was very happy to be working with Nevison because he was able to get Paul’s pop style which Paul likes to promote. “Crazy Nights” was a huge hit, especially in Europe. It was a good effort from the band; I like the packaging and everything. I think that we got a lot of mileage out of it.

Hot in the Shade.

This one started out with a lot of demo songs. And they decided to make the record out of the demos. Which I was kind of against, but I really didn’t have much of a choice. I think that there are too many songs on the record, although “Forever” and “Hide Your Heart” are on the record. Those are the two highlights.