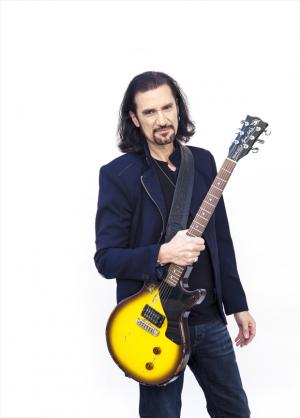 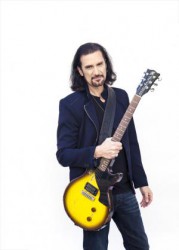 He’s a former Kiss guitarist from their makeup-free era in the late Eighties and early Nineties. But what Guitar World readers really want to know is…

What is the story behind your new Rock N’ Roll Relics guitar? — Michael Steadman

I was first introduced to Billy Rowe, the owner of Rock N’ Roll Relics, at the NAMM show, and I saw that he was very talented at taking vintage Gibson-style guitars and reliquing them.

And it made me think immediately of my Les Paul Junior from the [1992] Revenge/Alive III tour. It was one of the most beat-up Les Paul Juniors ever. I got it at Guitars R Us on Sunset Boulevard, and we recorded with it a lot. Gene [Simmons] loved it. Kiss even rented it for [1998’s] Psycho Circus, because they wanted that sound. It had a humbucker in it—a Seymour Duncan JB—but there was just something about the mahogany body.

It had “that sound.” So Billy from Rock N’ Roll Relics was the perfect person to make a copy of it. The new model has all the elements: a mahogany flat body and rosewood neck and a humbucker—an Antiquity JB, because obviously a new JB wouldn’t look really good in a reliqued guitar. Because this is a small company, we’re just doing this limited run of 25, and it’s available online [rocknrollrelics.net]. We’ve sold half of them already.

What do you consider your proudest guitar moment on record? — Chris

With Kiss, I think the solo in “Tears Are Falling” [from Asylum, 1985], which is melodic and tricky, and the acoustic solo on “Forever” [from Hot in the Shade, 1989], which shows another side of my style. And then something like “Unholy” [from Revenge, 1992], where I’m really balls to the wall in your face, using a wah-wah and distortion. I really got a chance to show the range of my playing during my Kiss years.

Do you think you, Vinnie [Vincent], Tommy [Thayer], Mark [St. John], Eric [Carr] and Eric [Singer] were cheated by not being inducted into the Rock and Roll Hall of Fame? — SFC Damion Thompson, U.S. Army

I’m totally unhappy with how the Hall of Fame handled this. We deserved to be inducted, and I know Gene and Paul’s intention was to present that argument to them, which according to Paul was a non-starter. I’m still extremely flattered that I’m related to a band that’s been inducted, and I certainly don’t have any issue with the fact that without the original four there would be no Kiss. But Kiss survived successfully for 40 years, and I know at least seven million records were sold with my name on them. So for the Hall to ignore that, I think that’s a travesty.

I saw you were recently married. Congratulations! I also saw that Gene and Paul were at your wedding. What do Gene Simmons and Paul Stanley give as wedding presents? — Henry McGee

I didn’t get an envelope or any gift from them that night, but technically, you have up to a year to give a gift. I kind of feel like there is something coming up that’s going to be a gift to me. Lisa and I, we’ve talked about it a few times, and them being there was a huge gift to me, and she felt the same way.

Our history is very unusual: We fell in love four and a half years ago, but I did actually meet her backstage in 1986. She was there for a meet and greet, to see Paul Stanley, you know? I wasn’t involved with anybody, but I wasn’t necessarily looking to hit on any girl in a meet and greet that day. I find it kind of ironic that things have always centered around this Kiss connection, even with Lisa. So I’m just looking at the big picture of things. Gene and Paul’s gift is related to the respect that they show me. You can’t put a price tag on that.

One of the songs on BK3, the last solo record I put out four years ago, is called “I’ll Survive,” and it’s about that event. It was surreal. I was leaving the Key Club on Sunset Boulevard after seeing my buddy Brent Fitz, the drummer with Slash, who is playing with Vince Neil. It was about 1:20 in the morning.

The shots came from a block and a half away, in front of the Rainbow Club. I couldn’t tell if it was a car backfiring or a gun shot. And then I got hit in the leg. It was as if someone was taking a hot poker and sticking it through your leg, but it happens so fast that you don’t know what the hell happened. My knee buckled, and I went down. What was weirder was that a ricochet bullet whizzed right by my ear and actually grazed my head. I heard the whistle from it as it went past. That was even more bizarre than having a bullet pass through my leg.

But I was lucky. The bullet could have shattered my kneecap; instead, it went completely through muscle. The paramedics showed up über fast, and the guy asked me to move my toes, which I did. And he says to me, “You’re going to be fine.”

I read that your brother Bob tried out for Kiss before Ace got the gig. Did he help advise you on your audition process? — Chip Douglas

My brother’s acquaintance with the guys was a good thing, but I think it also took other people to mention my name to Gene and Paul. I actually wound up doing a little ghost guitar work for Kiss on Animalize, but I’m not credited. At the time, Mark St. John was playing lead. Paul asked me to play a solo, and he happened to say, “Don’t cut your hair.”

I wasn’t aware that Mark was not going to be able to tour. [St. John was diagnosed with the arthritic condition Reiter’s Syndrome.] Then they asked me to kind of fill in on the tour, and that wound up becoming a 12-year stint in the band. Those people who go back and think, “Well, the first time I saw Kiss was in 1985”—if they’re not sure who it was, now it’s a matter of record: they saw me. Yay!

When did you become aware that Ace and Peter would be rejoining the band? Were you nervous when they guested on Unplugged? — Lazlo Kovacs

I actually was happily ignorant to any behind-the-scenes talk of a reunion. I certainly didn’t think that Kiss Unplugged [1996] would be the catalyst to make it happen. We had recorded probably 75 to 80 percent of Carnival of Souls [released in 1997], and that’s when Gene and Paul had a meeting with Eric and me explaining that it was time for them to try this reunion and that it would only be for a year, but that they were going to take care of us—which they did. Kiss had to lose the makeup in the Eighties, because it just didn’t seem cool anymore. When they brought it back in 1996, it was the right time for it. But I didn’t really think anything like that was brewing behind the scenes.

Was the period after you left Kiss difficult for you, or were you ready to move on? — Phil Leech

It was difficult. To see the hoopla surrounding them putting the makeup on, and then hearing, “First concert, sold out, stadium in Detroit…” I was like, That’s it, no more Kiss for me! That reality was hard, and then it got even worse. Because by the time Carnival of Souls came out, it had already been bootlegged, and the copies were terrible. I was doing a clinic tour in Europe, and some friends of mine from the Kiss world were like, “Check it out, I got a bootleg of Carnival of Souls”—which obviously hurt.

I had nine co-writes on it, so I didn’t want to hear about bootlegs. I think having Carnival of Souls kind of raped was more painful even than not being in Kiss. But from tough things in life, you hopefully really strap up your boots tightly and get going. And that’s what I did. I had my own band with John Corabi called Union, and I just forged on and never looked back really.

How did you get the gig in Grand Funk? You’ve been in the band for, like, 14 years now. — Dennis Maloney

I met [Grand Funk drummer] Don Brewer back in the days when I worked with Michael Bolton. Michael had just put out his first solo record [1983’s self-titled release], and we opened for Bob Seger. [At the time, Brewer was drumming for Seger’s Silver Bullet Band.] We got to party with the Seger guys and hang out with everybody. And I was always a Grand Funk fan, so it was like, Oh, my god, Don Brewer! So when Grand Funk went through its changes again after 1998, after the last time [guitarist] Mark Farner was involved, I was on the short list. You never know who you’re working with that even 20 years down the line could be relevant to your career.