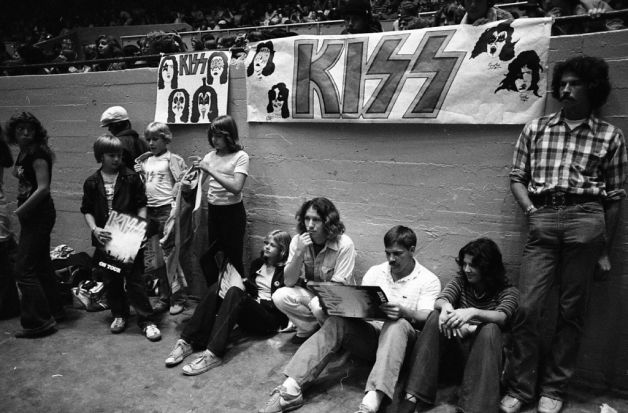 From what I’ve seen, 1977 was a fantastic year to be a rebellious teenager in the Bay Area with a little bit of disposable income.

There was no greater night than Aug. 16, when KISS played the Cow Palace with Cheap Trick opening. It was just two months after the release of ”Love Gun,” 10 days before the band recorded the bulk of ”Alive II” in Los Angeles and one of the last tours with all of the founding members (before the original KISS reunited as a nostalgia in 1996). It was also the day that Elvis Presley died.

This week’s Let’s Go to the Morgue! is a tribute to the KISS Army, and their phenomenal showing at the Cow Palace in 1977. I hope you all got home safe. And even in middle age, may you continue to rock and roll all night, and party every day.

A few more notes below …

— If you’re one of the face-painted kids featured in this photo gallery, please contact me at phartlaub@sfchronicle.com. I’m hoping to interview at least one fan for my ”Let’s Go to the Q&A” project.

— Chronicle music critic Joel Selvin, a noted KISS detractor, reviewed this show. He wrote his most scathing review during their first trip to the Bay Area in 1975. An excerpt from that piece: ”KISS takes the cake. The ludicrous hard rock quartet that appeared Friday at Winterland may be the most crass, worthless rock band to run through town in years. … The entire performance was silly (but not funny) and barely worth dignifying by comment.” His 1977 review was much more subdued, in a resigned/defeated kind of way.

— As we do in every photo that includes a concession stand menu, I’ve enlarged the negative so you can see the prices. Seventy cents for a hot dog! I’m sure in 1977 this was considered highway robbery. A feature on the concert also made fun of the $6 T-shirts and $5 belt buckles. (The joke’s on you, Chronicle! KISS vintage belt buckles sell on eBay for upwards of $100.)

— Thanks to former Chronicle photographer Stephanie Maze, who took a lot of time to capture the flavor of the concert. The concert photos themselves are also quite good. Due to bad lighting and general chaos, concert photos from this era at the Cow Palace are generally horrible. Maze is now a photographic book publisher in Sarasota, Florida. Check out her site here. (Sorry, no books on KISS …)

— For the record, I was 7 years old during this concert, and not into KISS. I had an older sister, not an older brother, so I was probably listening to the Bee Gees. I do remember that a classmate brought a copy of ”Love Gun” to Washington Elementary in Burlingame during the week that it came out, and one of the second grade teachers let us listen to it during school hours.