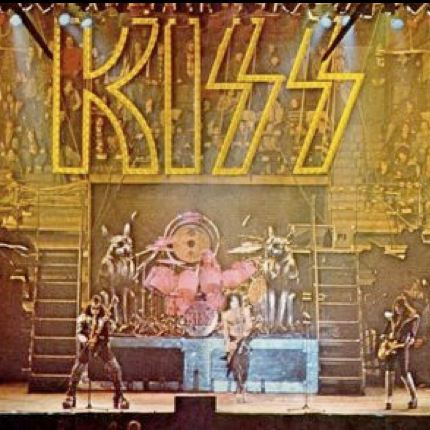 This is the first post for this blog, and I am going to start off with one of my favorite stage designs of the 1970’s, and the one that really got me interested in stage design in the first place: Mark Ravitz’s design for  the KISS  Destroyer and Rock N Roll over tours that toured America from July 1976 through April 1977. These tours marked two of the most successful tours KISS has ever had in terms of attendance, although people tend to remember and favor KISS’s stage design for their Love Gun/Alive 2 tours.   Mark Ravitz was kind enough to talk to me about the design, his background and shared with me some blueprints and photos of the set.    One of the reason’s that I am a big fan of the design is that it is very theatrical in nature and differed from KISS’s previous tours that were compromised mainly of speakers and a drum riser.   With the exception of a few, mainly British artists such as David Bowie (who Ravitz had designed his 1974 Diamond Dogs Stage with Jules Fischer for), Yes, and American Alice Cooper, this was one of the first overtly theatrical sets to be taken on tour by a rock band. Over 80 feet wide and designed to fit into large indoor arena’s and stadiums, the stage was an impressive sight.

KISS had met with huge commercial and financial success in late 1975 with their live concert album ALIVE.  They had earned a reputation with America’s teens as having outdone Alice Cooper with the wildest stage show around, which featured Peter Criss’s levitating drums, Gene Simmons blood spitting and fire breathing,  and Ace Frehley’s smoking guitar.  All accompanied by explosions, smoke, and 20 foot tall flame throwers. See Photo Below of their  1975 Alive Tour  Set:

For their next tour supporting their new album Destroyer,  they had a larger budget and they wanted to raise the bar, something KISS would consistently do for the next 35 years.  Ditching some of their longtime road crew in favor of seasoned professionals, the Destroyer tour took its design from the album artwork and featured a  burned out apocalyptic city as the theme.  Based on their success not only on broadway but with their crossover work with David Bowie and the Rolling Stones , The Jules Fischer Organization was hired to produce the stage.   Mark Ravitz was hired to freelance this design, as Jules had been his professor during his time at the NYU theatrical design program. ”The idea being that different portions of the stage would thematically correspond to a different band member’s stage persona.” (from Kiss Alive Forever)   It featured a multi-level design that had 8′ x 3′ platforms on top of the guitar amps and steps that descended from them to the main stage, a theme that would continue though 1980 in various forms. On either side of the drum riser, covering the large stack of guitar amps were theatrical flats that looked like destroyed buildings. See theblueprint here.

Foam pieces that could ”crumble” off were attached to the flats but were also dropped due to the time it took to clean them off stage.  On the drum riser on either side were two large 6′ cats with glowing green eyes that were themed with Peter Criss’s ”Catman” persona.
©Copyright Mark Ravitz

Above Photo: Richard Galbraith
At the end of the show, the drum riser would elevate on a scissor lift that was hidden from view by a giant scrim with a snarling cat emblazoned on it.   See the blueprints here.

Flanking either side of the stage were raised platforms that were accessed via stairs.  Ace Frehley’s raised platform resembled a lunar mountain and on which he would solo from atop of.   Gene Simmons raised platform was designed to look like an old gothic castle

from which a bloody stake that would rise up as he did his spitting blood routine. Mark Ravitz shared this this blueprint for the stake that would also spew fog from preforated holes at the top of it.
The spectacle can be seen from this video taken at Cobo Hall Detroit in January of 1977:

Behind and on either side of the stage were three electrical towers, that Ravitz had designed to look like the numerous towers that were on the New Jersey Freeways.  They acted as light towers from which par cans and spotlights were mounted and from which KISS Army banners would drop at the end of the show.

The towers had chaser lights that looked like christmas lights that connected them and ran out into the balcony of the arena.   As seen in the model to the left the floor was covered in a design that looked like a lunar surface on Ace Frehley’s side of the stage, and parched, cracked earth on Gene Simmons’ side.

Frontman Paul Stanley had initially been designed a multi-colored jewel encrusted area at the front center of the stage that can be seen in the photos of the model.  However, according to Ravitz, the band was unhappy with it and upon first seeing it at dress rehearsals, destroyed it while the tech crew looked on in shock. The front center area also featured a ramp that descended slightly towards the audience but that was removed after the first several shows.
Here is a rare photo of it:

Hanging above the set were several large clouds and lighting bolts that hid confetti machines behind them and also acted as a video screen, one of the first uses of the then-brand new technology that is now commonplace at all arena sized shows. Ravitz designed the lighting bolts to mimic the S’s in the KISS logo and had them painted red, white, and blue in honor of America’s 1976 bicentenial that summer.   A blueprint of the clouds and thunderbolts can be seen here.

©Copyright Mark Ravitz
One of my favorite touches to the set was a decrepit tree that looked like it came straight out of a horror movie cemetary.  It stood on Gene Simmons side of the stage, and rumor has it that it was originally designed to spin around on a revolving turntable but no photos of video can be found of that effect. In photos the tree looked to be about 15 feet tall and was supposedly made of rubber.

Ingo Floren shared with me this lighting list (Page 1, Page 2) which detailed all the channels for the lighting board.  Mysteriously the ”God of Thunder Machine” is listed and I have heard various rumors about what this actually was because no videos or photos exist of it.   Mark Ravitz claimed to have not remembered anything about it while Curt Gooch and Jef Suhs in Kiss Alive Forever say that it was originally designed in 1931 by Ken Strickfadden for Frankenstein.  It was supposedly a giant Tesla coil that would emit colored beams of electricity but reportedly got dropped from the tour early on due to its weight and unreliability. If anyone has any information about it, please forward it on to me.
I found this little news piece in Rolling Stone Issue 222 from 1976 where Jules Fischer gives a brief synopsis on the stage:

Unfortunately, there are few pro shot videos that show the stage in its full glory.  Here is one of the few featuring the closing song Black Diamond,  filmed at Anaheim Stadium in Anaheim, CA in 1976.