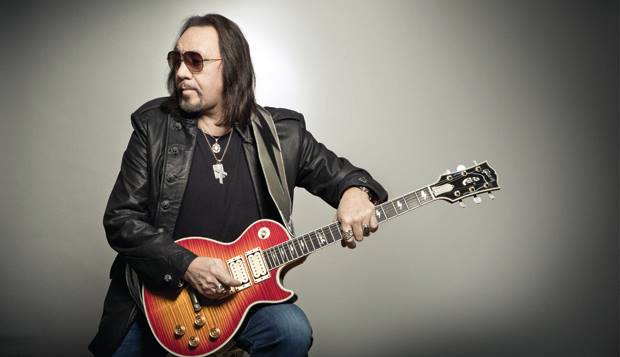 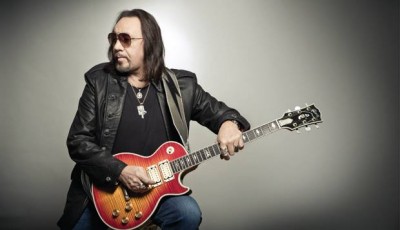 Then, Guitar World features Ace Frehley. The legendary Kiss guitarist is clean, sober, engaged to a pretty blonde and enjoying life- much to the chagrin of some of his former bandmates. He speaks with GW about his healthy attitude, the Rock and Roll Hall of Fame debacle and his upcoming solo album, Space Invader.

Tabs for Guitar & Bass: Ace Frehley – ”Rip It Out” 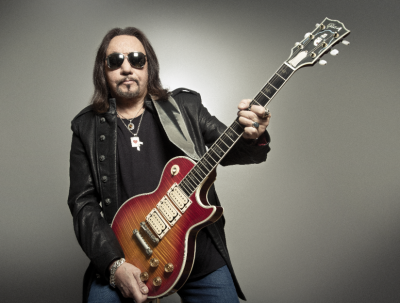 At 63, legendary Kiss guitarist Ace Frehley is clean, sober, engaged to a pretty blond and enjoying life—much to the chagrin of some of his former bandmates. In the following interview, he speaks openly about his healthy attitude, the Rock and Roll Hall of Fame debacle and his upcoming solo album, Space Invader.

This year started off innocently enough for Ace Frehley. Just one week prior to Christmas 2013, the former Kiss lead guitarist learned that he and his comrades in the original Kiss lineup—Gene Simmons, Paul Stanley and Peter Criss—were finally being inducted into the Rock and Roll Hall of Fame after 15 years of eligibility (and 15 years of outcry from the Kiss Army).

A cause for celebration, no doubt—and a golden opportunity for the four founding members of the legendary rock band to perform onstage together again for the first time since October 7, 2000, the final North American date of their Farewell Tour.

And then, somehow, it all imploded. In the weeks preceding the Rock and Roll Hall of Fame induction ceremony on April 10 in Brooklyn, New York, Kiss became the primary focus of every public and private discussion surrounding the event after they announced that there would be no Kiss performance—let alone a Kiss reunion—that night.

To make matters worse, the band members seized every opportunity to lambast one another in the press on a seemingly daily basis, effectively rendering what was supposed to be a triumphant reunion performance loaded with all the blood-spitting, fire-breathing, makeup-running pageantry that fans had been clamoring for all these years into a pitiful non-event.

“I was like, Jesus Christ, after 40 years of support you can’t give the fans 10 minutes?” says a still worked-up Frehley over a cup of black tea at Guitar World headquarters in New York. “The fans wanted it, the Rock and Roll Hall of Fame wanted it. But Gene and Paul didn’t. It’s sad. They definitely lost some fans because of this decision.

“I think the reason they didn’t want to get together with the original members was because they’re afraid of history repeating itself. When we did Unpluggedin 1995, you saw what happened: because the fans were so excited about me and Peter playing with those guys, they had to scrap their last record [with then-current members Bruce Kulick and Eric Singer] and do a reunion tour [with Frehley and Criss in 1996]. Although at this point I don’t think Peter could do a two-hour show and a full tour. But I still got the chops. I definitely blow [current Kiss guitarist] Tommy Thayer off the stage.”

It’s obvious that Frehley is fired up, and with good reason. With the Rock and Roll Hall of Fame fiasco behind him, the clean-and-sober Spaceman is able to focus on the things in life that make him happy, like living in San Diego with his pretty blond 47-year-old fiancé Rachael Gordon, writing books, working with Gibson on various signature guitars and recording new music. Space Invader, his first record since 2009’s top-notch Anomaly, is due out in a few weeks, and Ace couldn’t be more excited.

“I haven’t had a drink in more than seven and a half years, and I feel great now,” says the 63-year-old guitarist. “I’m writing great songs and I’m singing great, and I’m super excited about this new album. It’s gonna be even better than Anomaly. I played some tracks for a couple of guys I was considering using for mixing, and the first thing out of their mouths was, ‘God, your voice sounds like it did on your 1978 solo record.’ Unlike some other people, whose voices aren’t maybe what they used to be. Not to name names, or anything.”

Your love affair with alcohol during Kiss’ heyday—and, well, all through the Eighties and Nineties—is well documented. Do you miss it? Are there days when you want a drink?

No. I haven’t had the urge to drink in a long time. And I don’t miss the hangovers, I don’t miss the smells, the late nights at the bars, or the people. I was hanging out with some pretty shady people in my heavy-drinking-and-coke years. I was in some situations that really could have gone sideways. I was just lucky. And you have to realize that my fans used to emulate my behavior when I was a crazy man—“Ace is a party animal, let’s go get loaded!” Then they’d go crash their car, and I’d feel terrible.

Now it’s turned around. And when someone comes up to me and says that they haven’t had a drink in six months and that they’re doing well because I am, that makes my day. Maybe that’s one reason why God has kept me alive. By all rights I should have died a half dozen times already, so every day above ground I’m thrilled.

Did you think Kiss would ever be inducted into the Rock and Roll Hall of Fame?

I knew that [the Hall] had to buckle to popular opinion. It was only a matter of time. We were first eligible 15 years ago, so I knew it would happen eventually. I mean, how can you exclude Kiss, one of the biggest American rock groups in history? Even though we didn’t perform, I’m still thrilled to be in it.

Where were you when you found out that you were being inducted?

I was at home in San Diego and got a call from my manager. Then, about a week later, I got the “congratulatory” call from Paul and Gene. And I could tell that there was some hesitancy on their part about the whole thing. I was asking them if we were gonna play, and Gene avoided the question by saying, “Well, we’re just looking forward to getting the four of us up there together and celebrating…whatever.” It was a noncommittal congratulatory call.

Then, about a week later, I was told that the Rock and Roll Hall of Fame absolutely wants the four original members to reunite, and I said, “Great, I’ll do it.” And there was silence from Gene and Paul. And finally it was shot down. The next thing I heard is that Paul and Gene wanted to perform with the current Kiss lineup [with Tommy Thayer and Eric Singer]. And I said, Well, that’s kind of a slap in the face. I mean, they’re not even being inducted. I have to sit through a Kiss cover band when I’m receiving an award? I don’t think so.

I also heard at one point that they wanted me to perform in makeup with Tommy at the same time. I really didn’t want to be onstage with Tommy, but I said I would do it, as long as I got to play the bulk of the songs and that I could wear the Destroyer costume. Then a few days later [it was], “No, we’re not gonna play at all.” It was almost like they were trying to bait me, so that if I said no to anything they would just blame me for there being no performance. I was almost going to boycott the whole thing.